The day I made my debut appearance at Tollcross parkrun…

A few of our GSRR pals had decided to do a bit of parkrun tourism and me and mum thought we’d jump on the bandwagon. Tollcross turned out to be a very wise decision. Most other Glasgow parkruns were off due to very slippy conditions underpaw.

On a crazy quest for miles, dad ran to Drumchapel parkrun to meet uncle Robert (also looking for mad miles) only to find it cancelled! They skated round anyway and then slipped on, homeward bound. Both managed to stay upright and got some good training in for their upcoming 42 mile race.

Although Tollcross was on, we would be running the alternate course, which is all on grass instead of the icy paths. We met the rest of the GSRR team and gathered for the race brief.

Me and mum headed for the back and met another canine runner. We had a brief bum sniff and got our leads in a nice wee tangle before heading for our starting positions. Mum told me to sit, so i did. Im good like that. I glanced to my left and saw a very exciting dog meeting happening. Before I knew it I was sprinting towards them. Took mum quite by surprise since I was still attached to her. Nearly pulled the old girl over. I was soon springing back once I reached full stretch of my lead though. Whoops! Sorry mum.

I sat down and watched the meeting from afar and sent my apologies via pee-mail afterwards. So we were off. It’s always a bit of a job at the start since everyone is so close together. I have to try extra hard not to get under anyone’s feet or trip folks up with my lead. Since we were running on the grass today we were able to take it wide and stick to the left I am happy to report there were no casualties. 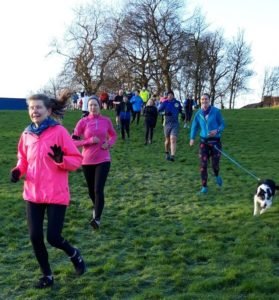 Its such a buzz running amongst a huge pack. You can feel the energy of the crowd and it always makes me smile. I did a couple of jumps up at mum to tell her that I was giddy. She told me to run on and I settled into a more sensible, forward propelling groove.

The alternate course is a four lapper. I was trying to keep track but lost count somewhere between two and three paws. It was great on many levels though. We had lots of pals running and saw them many times as we passed in opposite directions. We were even lapped by Phil so had an extra sighting of him. The ground was soft underpaw, even squelchy in places. Muuuud!!! Yaaasss! There was a really refreshing puddle on the course too. Full of my favourite blend of mud and leaves. For some reason I seemed to be the only one taking advantage though.

The marshals were very encouraging. One cheery lady suggested to mum that I was pulling her along so the next time we passed her I hung back and let mum power herself up the hill! I was getting pretty tired by then anyway so I enjoyed the rest.

We ran onwards. I spotted a very sweet looking dog walking with her human. She smelled good. I lifted my tail, perked up my ears, puffed out my chest and paraded passed. Then I pee-mailed her on a nearby tree. I am such a smooth operator. I then spotted a marshal with a camera so I continued to run ahead of mum like a pro and I gave the lovely marshal my best smile. Cheeeeeese!!!! Mmm cheese. 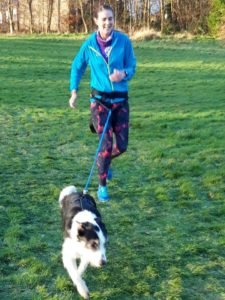 The nature of the alterate lappy course was at times quite confusing for me though. There were people running in all sorts of directions. We were being lapped by people whilst overtaking others. There was a few times the temptation to jump across and run with the people running in the other direction was very hard to resist. I managed to stay focused though, mostly, with some (a lot) of guidance from mum. I was flagging a bit towards the end, I turned to mum and asked her to throw a race cone for me. Has anyone noticed how frisbee like those things are? And there’s nothing like a game of frisbee to revitalise my stride! She said “run on”, I heard “game on” so stopped and got ready to chase! RUN ON Jim!!!

Before I knew it we were heading for the finish. Me and mum crossed the line in 32.22. Well, mum did, I got distracted and missed the funnel! Not a parkrun best but it was a Tollcross PB and I think I was first dog. I’ll take that. I’ll be back to do the regular course soon. Thank you Tollcross parkrun

Read more of my blog here