Race 4 in Pollok Park was nearly a non-event. Frost and ice had played havoc with the local parkrun events across Glasgow on Saturday. Numerous cancellations included Pollok Park. With this in mind the Race Director, Alex announced on Saturday afternoon the race start would be delayed 30 minutes to 10.30. Hopefully allowing some additional time for the course to defrost.

An early morning inspection, and with a minor diversion to include some more trail and avoid a little icy section, the race was on! Not only was it on, the weather was perfect. Cold and crisp, with sunny skies.

With all but one runners successfully finding the start line, the race would go off at 10.30. In fairness to Viki, she had run an ultra on Saturday and finished 2nd female! Getting lost finding the Pollok Park start line may have been an ‘accident’!

The pre-race brief had promised mud, highlighting that dirt dodging would be entirely pointless. Reversing a small section of the parkrun route, the runners were soon directed off the path onto the trails. Downhill toward the parkrun finish, but through the muddy trails. On duty marshall, Brian Hughes, was ignored by several runners when given the instructions to run through the mud. (Maybe they should be DQ’d for ignoring the marshal!?) Little did they know how futile this attempt to avoid the mud would be.

Up past the building site that is the Burrell Collection, where the site supervisor had agreed to keep the path clear of workies and vehicles for the duration of the race. He couldn’t risk an accident. Good news. We weren’t expecting them at work on Sunday. Health and safety working in our favour.

The first diversion to avoid the flooded glade, so runners once again running reverse parkrun down the hill. Reaching the main path, participants were once again directed off road. A small frosty grass section, and a marshal – Jacqueline Glass – pointing up a muddy hill. At the top, partner in crime Gillian Glass stood poised with her camera. We’re looking forward to those shots!

The sloppy slog through the mud of the Rhododendron Trail starts here. Runners realised their shoes would not be staying clean! Crossing the path onto the second section of the Trail, folk were greeted with deeper and wetter mud! Out at the other end, only to be sent around again for a second lap! 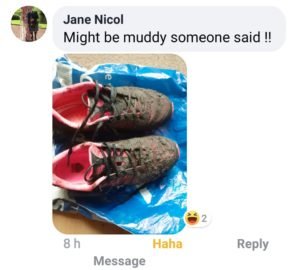 Showing his love for the muddy trails, Crispin Walsh (Giffnock North) cruised over the finish line in a fantastic 18.26. There was a good battle for second and third. With both Richard Cooper (Cambuslang Harriers) and Colin Whitby (Irvine AC) on the recovery from their ailments it was impressive stuff. Whitby having learnt his lesson from Lx5 arrived in trail shoes! With their assistance he managed to hold Cooper off to take the 2nd place in 19.08. Cooper chased him over the line in 19.12, and quickly started orchestrating a group photo with the other runners as they crossed the line. (see article cover image) 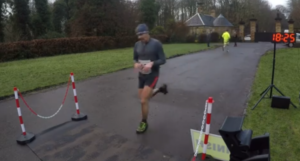 The women’s podium took the now familiar order, with Jenny Brown taking the tape in 22.10. Serial runner-up Kirsty McLeish crossed the line in 23.43. A mud-spattered Sheila Murray showed that class runs in the family, sister of winner Brown, she crossed the line in 23.55 frustratingly having had McLeish in her sights for much of the race. 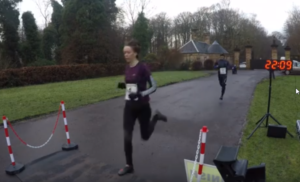 The Battle of the Bellas

With the event taking part in the backyard for both Bella clubs, it wouldn’t be right to leave out a wee head-to-head.

With race sponsor Mikey “Migo Sports” Gowans finally making the start line (albeit nearly 3 minutes after everyone else departed) for the first time in the series, and the camera shy Paul Clawson also arriving, Bellahouston Harriers managed to pip their Road Runners rivals into second place 40 points to 45.

Gowans was in full voice making up time through the field, passing a Road Runner with a shout of “get oot the way loser”!! A Bella Roadrunners discount code maybe in the offing as a conciliatory gesture!

John Cunningham was also quick to point out that Harriers also won the V70 category, with Christopher Steward smiling his way round the series and crossing the line in 31.14 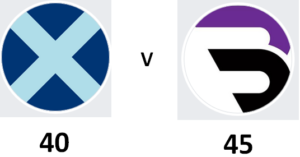 Trail runners in the making

With many a road runner taking part in the series, some are well on the way to full trail converts! “Where’s the mud you promised” quipped one runner to the race director as she completed the first lap.

“If I’d known it was this much trail I would not have entered, however I’m now glad I did” commented another runner

TRB core member (and amazing individual!) Michelle Sinsheimer, said “it is great that TRB are bringing racing to the amazing trails the Southside has to offer.”

But in conclusion, Colin Whitby is indeed correct. Bellahouston will see us on the tarmac. With the council concerned about the state of the grassed areas within the park, they were left out of bounds. But rest assured, the route isn’t flat! Remember South Side Six? Remember those steps…..

To enter a TB event check our listing