With the leaderboards hotting up, we headed into the penulitimate event, Bx5, in Bellahouston Park.

It was touch and go whether we would proceed with this event. Clearance was granted from Glasgow City Council on 24th January due to ongoing groundworks and drainage problems in the park. There was a huge sigh of relief in TRB HQ when that email arrived!

Not the only thing left late, having recced’d two routes last week, race director Alex was still unhappy. They were not Sx5 routes! Maybe the lack of mud! Alex said, “The routes seemed to belong to someone else, like a 5k version of the Jimmy Irvine”. A mid-week re-draft saw the final race route devised. Still no mud, but he found some hills.

Race day dawned, the TRB team arrived on site, bleary eyed from a long day out in Lancashire the day before. Bx5 was an easy course to mark, as it would be the amazing volunteer team directing the runners.

The race brief was delivered quickly as the drizzle persisted, and runners were sent off with a nice gentle inclined start! This would mean a speedy finish, and it was to be so. 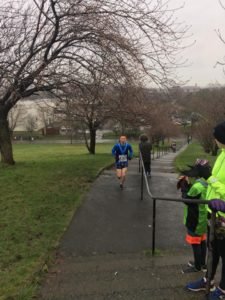 With a hard left, and sharp descent the route swept round the pitch and putt towards the Leisure Centre, and the foot of the infamous Bellahouston steps. A classic feature of the old South SIde Six route, it couldn’t not be part of the race day.

Tough climb up the steps, to the shouts and cheers of the Glasgow Tri Fusion juniors! Fantastic! 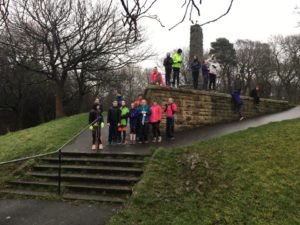 Already the route is heading back towards the finish line, but it wasn’t to be that short or easy. A clamour of cowbells, reminescent of Ski Sunday, alerted runners to the tough climb ahead. Round the back of the dry-slope and a fast downhill to the Palace of Art and back to the Leisure Centre. Runners were relieved to be directed past the steps, and back the opposite way round the pitch and put. A tough climb followed back up to the ski slope to commence the second lap.

Next time around half way up the hill, partipants sighed and groaned but were happy to be turned down the start incline. A fast downward sprint towards the finish line, between a guard of honour of lime trees.

From the off, Bellahouston Harrier, Fraser Armstrong set the pace pulling a good lead on the Cambuslang Harriers duo of Mark King and Richard Cooper. On the second round Arsmtrong still in front led the older guys. King worked hard with a grimace to reign the youngster in. Cooper close on King’s heels wth a smile on his face, clearly looking the stronger of the two.

Cue some surprised faces on the finish line. Looking up the tree lined straight, King burst into view in the lead. Legs and arms pumping down the hill. A glance at the clock showed an opportunity for a sub-18 finish. it was not to be, with the clock ticking over to 18.07 as King crossed the line. The female finish podium a familiar 1-2-3 of Jenny Brown, Kirsty McLeish and Sheila Murray, also wrapped up the series standings. McLeish even quipped to a concerned Murray, “We’ve got this”! 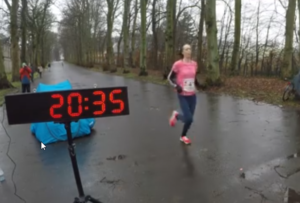 We head to Queens Park for the finale on the 16th February – Valentine’s weekend. We’d love to see you at the after party and awards ceremony in Queen’s Park Bowling Club. With series runners collecting their goody bags and medals and series prizes to be awarded.

Hot soup, tea/coffee and the open bar available. Non runners are asked for a donation. Runners can also avail themselves of a free massage courtesy of Anika Ainslie Aromatherapy & Massage

Enjoyed South By Five? Why not sign up for the next TRB event – the Dick Wedlock Fire Five Race – details and enter here