After an epic sleep, the saturday morning alarms went off. I had a good old stretch, yawned like a howlin wolf and got into position outside the bedroom door. Ready to pounce and jump about like an eejit as soon as someone appeared. Felt like I hadn’t seen them in forever. When was the last time someone scratched behind my ears? Hours? Days? Weeks?.. By heck I miss them. I gave the door a wee scratch. Eventually mum appeared. Muuuuuuum!!!! Initiate giddy bounce routine!!..

It looks like we are going running!!! All the signs are there. They’ve donned their lycra. Mum’s ramming her bag full of snacks and I’ve got my harness on. Yes! We are off, to the Bash mobile!!.. Bashy?? We walked past the Bash mobile? What the hairy heck? Maybe we aren’t going running after all. Meh!.. We walk on, when I look up from my latest sniffathon we are on the train station. Hmm. I smell adventure. Boy was I right. Not one train, but two! Then a boat! We were chilling out in the pet zone when my pals started appearing. Kirsten and Andrew first, then Rodger, Paul and Steven. Yaaas!! Looks like we were set for some sort of epic GSRR outing. I was beginning to wonder if we were just testing public transport out for size.

Before I settled down for my pre adventure nap, I made my way round everyone and made sure they all got a turn of patting me. Some real patting skills amongst the group. I decided to cut my nap short and do a few more rounds of the gang instead. Got myself in a bit of a tangled pickle by the time I’d made it round the table a few times since my lead was attached to the hook on the wall. Every time Jim, every time!… Whoops! 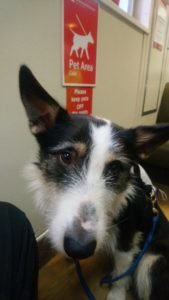 Not sure how long the boat took, hard to keep track between naps and belly rubs. Soon enough we were getting off though and I was able to do my first of many pees on the beautiful Isle of Arran. I’d only managed to smell a pawful of lampposts when next thing I know we are queueing up for a bus. A bus? Where on earth are we going? We’ve been travelling for days! While we waited to climb aboard, another of our GSRR friends Kirsty, came running towards us. Turns out she was on holiday with her family and just popped down to say hello. Nice to see her. We said cheerio and hopped aboard. To Sannox. Not sure what or where that is but thats where we asked the pilot to take us.

Should I have done more pees when we got off the boat? I thought we had more time. I crossed my paws. Luckily the journey wasnt too long, 20 minutes in human years.

When we got off the bus it was clear that we had reached our final destination.. Or the beginning of our epic running adventure. My human compadres started shedding layers and cramming them into bags. There was a buzz amongst the pack, who were as keen to get going as I was. After a series of bleeps from their wrists we were off up a hilly farm path. The air was so fresh and there was a hint of sheep to it. Wasn’t long before we located the source of that aroma. They looked at us with a mixture of interest and confusion. A pack of seven humans and one handsome dog, trotting passed. Probably not something they see every day. Dad put me on the lead and I tipped my hat to them as we glided on passed. 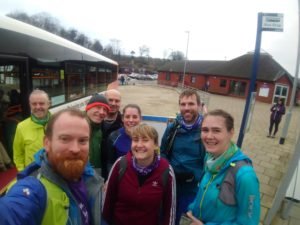 We cruised on and soon made it onto more open ground where I was allowed off the lead. The view’s over the glen were breathtaking. A stunning selection of hills surrounded us. We could see the riverside path winding up the valley for what seemed like miles ahead. The river was a sight to behold, filled with mini waterfalls spilling over rocks and pools with the clearest water I have ever seen. Tasted pretty good too.

The pack soon spread out as they all adopted their own pace. From the back they looked like small dots, moving up the valley. The terrain was filled with variety. Rocky paths turned to heath and bog.. Especially when me and dad decided to go off path and prance about in the rough for a bit. What a laugh. I love getting in and amongst nature like that. We found lots of mud too. Superb. There was plenty of opportunity to get my paws wet as the path crossed over streams. I lept over the smaller ones with ease and careered through the wider crossings.. Chaaaaaarge!!! I much prefer that to the stepping stones my pals were using, they can be quite complicated on four legs. 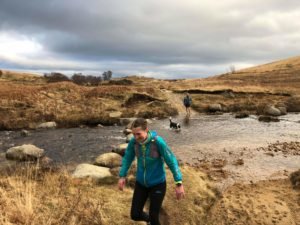 The tremendous path through the valley did one final river crossing and then began to go up, and up, and up and uuuuup. Had the magical path somehow led us to Jura? Memories of boulder fields came flooding back as the rock staircase got steeper. Our local expert Steven had warned that the climbing section did get scrambley in parts. While we were scrambling up we asked if this was the section he meant.. It wasnt. More up. I waited for mum on a ledge, as she heaved herself up I gave her a motivational inner ear lick. You are welcome!

Our journey continued. Jura always in the back of my mind. But I took it in my stride. One huge stone step at a time. We made it to Steven who was waiting to introduce us to the ominous scrambley section..

A vertical scramble that, at points, had the humans on their hands and knees. Now we have a chimney at home. Cleody cat tries to climb up it every day. Tries to get me involved but I’ve never been interested. I’m happy keeping edgey while she does her thing. But it looked like this time I was going up. It was quite exciting really. I can see why Cleody likes it. Most bits I did myself but a few times I had to be passed between dad and Steven. I had the odd slip but on the whole was a total pro and remained cool as throughout. 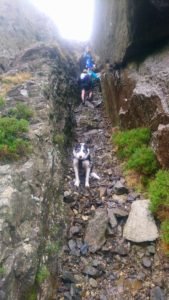 The view from the top was phenomenal. A perfect picture showcasing the route we had just taken. Talk about worth it. It was breathtaking. As was the wind. Crikey!! No time for hanging about in that. Few pictures and we set off down the other side. A refreshing tornado shaking through my eyebrows. The gradient of the downhill was nowhere as steep as the up so me and dad went flying down. The path was rocky but we negotiated it with ease. Four paws are better than too.. and dad is part mountain goat. The downhill just kept coming, it was awesome. Especially since we’d spent so much energy earning it.

Throughout the whole route, my fast running friend Andrew decided to adopt the Jim method of running. What can I say, I’m a trend setter. He would run ahead at top speed, pee on a tree and then come running back. He did this so much he did 6km more than the other humans. Talk about inspirational, maybe i should dip a paw into coaching. Motivational ear licks on tap!

We carried on and the path got flatter and continued to follow the river. The sound of that rushing water coupled with the amazing views and fresher than fresh air made me feel so alive, You just can’t beat times like these. Particularly when you get to share them with special people. 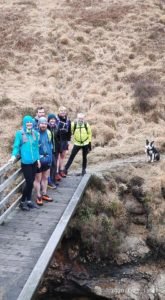 We crossed a bridge and replaced the lovely river path with muuuuuuud!!!! Oh yes, it just gets better. The path then led us through a shady forest and over some undulating grassy sections. No bother for me. Onwards to the grounds of Brodick Castle. A lovely sweeping foresty section, soft underpaw and very pleasing to the eye. Before I knew it we were out of the forest and onto the road.. Did somebody say cheese shop??!! Oh yes, onwards to the Arran Cheese shop for some well earned free samples. Mum was so giddy!! We bought some cheese too. Mmm. Cheese. 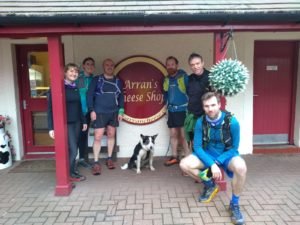 On the home stretch now, revitalised by the cheese and the general high on life vibe that was flowing through the pack, we headed for the finish. Just when I thought it couldn’t possibly get any better we ran onto a beach. Beeeeach!!!! Heck in a handbag. Sand. Sweet soft sand. Wow! The sand led us over a short boardwalk section and onto the finish. Another beach. Perfection. 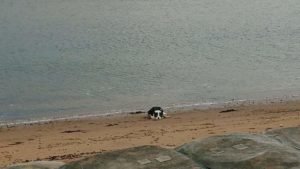 Steven not only pats like a pro. His route was outstanding.  Definitely up there with the best I’ve done. The perfect introduction to Arran.

Can’t wait till next time

Check out my other adventures here